U2's Larry Mullen Jr. Heads to Cannes as the 'Man on the Train' 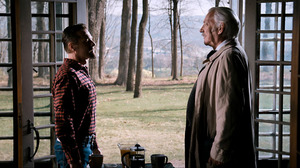 The drummer is about to take a turn in the spotlight as a star, producer and composer of the crime drama.

by Jay A. Fernandez, The Hollywood Reporter

When it comes to U2's public face, it's usually Bono and The Edge in the spotlight. But Larry Mullen Jr. -- one of the band's "quiet ones" -- is about to take a turn.

The drummer is set to make his film debut as a star, producer and composer of the crime drama Man on the Train, which Sierra / Affinity and Preferred Content will be selling in Cannes next month. The film also stars Donald Sutherland, Graham Greene, Tony Nardi, Carlo Rota and Kate O'Toole in an adaptation of Patrice Leconte's 2002 film L'Homme du Train, about a retired small town school-teacher (Sutherland) prepping for open-heart surgery who crosses paths with a stranger (Mullen Jr.) planning to rob the local bank.

Continue reading U2's Larry Mullen Jr. Heads to Cannes as the 'Man on the Train'.

U2 tops the Hot Tours rankings with over $60 million in ticket sales from three venues on the South American leg of the band's ongoing worldwide tour. The 360° Tour that began in June 2009 made its only trek to the continent during March and April, playing markets in three countries. Noteworthy among those performances was the final stop of that leg as the band posted the third-highest gross ever reported to Billboard: a total of $32.7 million from 269,491 tickets sold in São Paulo, Brazil at Estádio do Morumbi on April 9-10 and 13. Only Bruce Springsteen's $38.6 million from 10 shows at Giants Stadium in 2003 and the Spice Girls $33.8 million from 17 shows at London's O2 Arena in 2007-08 have historically grossed more.

The band's first South America performance was in Chile at Santiago's Estadio Nacional on March 25. With a crowd of 77,765, U2 broke their own attendance record at the stadium, filling 420 more seats than they did in Feb. 2006 during the Vertigo Tour. Next on the itinerary was Argentina with shows on March 30, April 1 and 2 in Buenos Aires at Estadio Único Ciudad de La Plata. The 53,000-seat soccer stadium was filled to capacity for all three nights with an attendance total of 172,029 and grosses topping $20.5 million US$ (83.2 million pesos).

Spider-Man the musical set for revamp

The Broadway musical, Spider-Man: Turn Off The Dark, has halted production in order to revamp the ailing show.

By Daniel Bird, The Telegraph

The musical is undergoing a major overhaul with a new creative team being brought in to develop the staging, assist with rewrites and create additional choreography.

U2 band members Bono and The Edge have also produced new songs for the revamped show.

In March, producers of the £40 million production, the most expensive in Broadway history, hired a new team to replace director Julie Taymor.

Muse and U2 Appear Live Together in Brazilian Bar

Local drinkers in Sao Paulo's intimate Bar Secreto were left stunned last week as members of U2 and Muse turned up at the bar, fresh from finishing the South American leg of U2's '360' World Tour, and began to play live.

The groups had been playing at the city gigantic Morumbi Stadium for three nights as part of a seven gig South American stint, and evidently had decided on a late night encore as U2 front man Bono and drummer Larry Mullen took to the stage at the bar. The hastily constructed supergroup was then completed by Muse's Dom Howard for a cover of Talking Heads' 'Psycho Killer (reports The Sun.)'

Continue reading Muse and U2 Appear Live Together in Brazilian Bar.

U2 As Big As They Could 'Ever Get'

The 'Vertigo' rockers were declared to have the highest grossing tour ever - beating a record set by The Rolling Stones - last week, having made £341million pounds with 20 dates to go, but the tour itself is also the most expensive ever staged, taking 120 lorries to transport its 50-metre tall sound system, stage and lighting rig.

Continue reading U2 As Big As They Could 'Ever Get'.

U2 pulled a pair of rarities into Sunday's (4/10) show in Sao Paulo, Brazil, mixing things up as the band moves through South America on their way to a U.S tour leg opening in May.

As reported by U2 tour tracking site U2tours.com, "Out Of Control" made its way into a U2 show for the first time since 2006, and deeper into the set, "Zooropa" saw its first appearance since the "Zooropa" tour in 1993.

The band also staged a tribute to the victims of an April 7 mass-shooting at a school in Rio de Janeiro that left 12 children dead before the alleged gunman took his own life.

Continue reading U2 shakes up setlist as they snatch tour gross record from the Rolling Stones.

U2 to Break Record For Highest-Grossing Tour of All Time

U2 are about to claim the record for the highest-grossing tour in history. After the band's second show at Morumbi Stadium in Sao Paulo, Brazil, the gross for the Irish band's U2 360 world tour will pass the $558 million mark, eclipsing the Rolling Stones' take for their A Bigger Bang tour of 2005-2007. By the time the band wraps up its next North American leg on July 30th in Moncton, New Brunswick, Canada, the band is projected to make around $700 million in total.

Continue reading U2 to Break Record For Highest-Grossing Tour of All Time.

U2 are working on a ''sci-fi'' sound with RedOne for their new album.

The 'With or Without You' group, fronted by singer Bono, worked with Lady Gaga producer RedOne on tracks for their next record, resulting in a "futuristic" sound.

RedOne said: "Bono described the album as 'futuristic'. U2 going sci-fi or something, that's how he described it.

"We've put down a few ideas, but we don't know how many will end up on there.

"They have a very special way of working. A song is never done until the day before it comes out almost, so you never know."

This page is an archive of entries from April 2011 listed from newest to oldest.

March 2011 is the previous archive.