U2 have confirmed that they will headline Glastonbury festival's Friday night (June 24) this year.

Guitarist The Edge made the announcement in a video speech played at the Shockwaves NME Awards 2011 ceremony in London tonight (February 23).

The declaration came shortly after Glastonbury had been named Best Festival at the bash.

Killing Bono soundtrack set for release at the end of March

The film, directed by Nick Hamm, follows former Hot Press writer Neil McCormick's attempts to make it as a rock star, whilst his schoolfriend Bono becomes an international icon. It will be released in the UK and Ireland, by Paramount Pictures on April 1.

The Killing Bono OST includes the exclusive and previously unreleased 'Street Mission' by The Hype (U2's first incarnation). It also features the U2 classic 'I Still Haven't Found What I'm Looking For,' from 1987's The Joshua Tree.

Continue reading Killing Bono soundtrack set for release at the end of March. 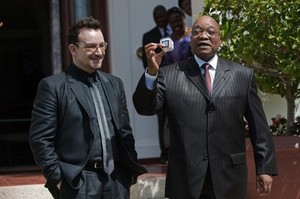 PRESIDENT Jacob Zuma proudly holds up a tiny, red object and the assembled group of journalists strain to see what is in his hand.

The iPod was a gift from U2 singer Bono, Zuma explained.

Bono said it was an iPod nano from his own Product Red brand created to raise awareness and funds to combat HIV/Aids in Africa.

The statesman and frontman met yesterday morning in Cape Town at Genadendal, the president's official residence.

Hofmeyr boycotted the band's concert at the FNB stadium on Sunday, and claimed he threw his two tickets, worth a collective R5000 into the Jukskei River.

He did so in protest after a newspaper report that U2 lead singer Bono supported political struggle songs, including the controversial Shoot the Boer song, sung by ANC Youth League president Julius Malema.

The Irish singer and political and human rights activist reportedly said struggle songs had a place, but should not be sung in public places and a "certain community. It's pretty dumb," he said.

A glorious night as U2 wows crowd in Joburg

With a roar that could rival the one seen last week in Tahrir square, Cairo, fans at the FNB Stadium last night gave U2 a rousing welcome.

But unlike the relief of Egyptians at President Hosni Mubarak's exit from his position, fans here were celebrating seeing their favourite band playing in their own back yard.

And as lead singer Bono led the band up a stairway to the stage milking the applause and waving to all corners of the dimly lit cauldron, you knew why they'd sold over 150 million albums worldwide.

After the deafening welcoming screams, Bono wasted no time in belting out one of their biggest hits, Beautiful Day.

Continue reading A glorious night as U2 wows crowd in Joburg.

Plus: The Edge confirms U2 are working with Danger Mouse on new songs

While in South Africa for the opening night of the fifth leg of U2's 360 tour, Bono stirred up a local controversy by endorsing an anti-apartheid song that includes the lyric "shoot the Boer" in an interview with South Africa's Sunday Times. The word "Boer" translates to "farmer" and refers to the Dutch settlers who came to the country in the 18th century. It is now used as a derogatory term for causasians.

Bono was asked about the song because it has been at the center of a political controversy in South Africa in which the leader of the African National Congress' youth league has been in a legal dispute with a white lobbying group over whether the song should be banned as hate speech.

The Irish pop star Bono has been criticised for apparently endorsing a song which includes the lyric: "Shoot the Boer".

The U2 frontman said the song, which was sung during the fight against apartheid, had its place, like music supporting the Irish Republican Army.

His comments came at the start of U2's tour of South Africa.

But callers to local radio stations said the song was designed to stir up racial hatred.

"That's hate speech. They don't know our history at all," said one caller to a South African radio talk show.

Black technical staff to protest at U2 concert

Hundreds of black technical staff have threatened to protest at a U2 concert in Johannesburg this weekend after accusing the show's organisers of racism.

By Aislinn Laing, The Telegraph

A union representing stage crew and technicians claims that major concert promoters are turning "by default" to white-run production companies rather than giving young black talent a chance.

It has threatened to set up a picket line to raise the Irish superband's awareness of the issue at the backstage door of the FNB stadium near Soweto, which previously hosted the opening and closing matches of the World Cup.

Freddie Nyathela, chairman of the South African Roadies Association which represents more than 600 mainly-black sound and lighting production workers, said he was expecting 200 people to take part in Sunday's protest.

Continue reading Black technical staff to protest at U2 concert.

The California Coastal Commission granted a last-minute request to postpone a scheduled Thursday vote on a controversial project proposed by U2 guitarist the Edge that would allow him to build five mansions on a ridge above Malibu.

The rock star had proposed five widely spaced mansions with swimming pools and spectacular ocean views, but he had been accused of trying to skirt environmental rules by concealing who owns the property.

Commission staff has recommended rejecting the plan, which they said would scar the undeveloped ridgeline, cause extensive geological disturbance and destroy environmentally sensitive native vegetation.

The Edge, whose real name is David Evans, has been fighting for permits since 2006. Environmental groups and local residents who oppose the project have said it is out of sync for a member of a band that has championed humanitarian and environmental causes.

U2 will release their new album in May - according to one online retailer.

Although no official release date for the record has been announced, the German version of retailer Amazon, Amazon.de, has listed a new release for the band for May 27.

U2's spokesperson told NME: "As has been widely reported U2 are in the studio working on a new record but no release date has been set."

This page is an archive of entries from February 2011 listed from newest to oldest.

January 2011 is the previous archive.