Bono and Guggi: A friendship based on art, punk rock and Jesus

Earlier last week, U2's The Edge was invited to share his thoughts on preventive medicine on a panel called "Food as Medicine" at the Milken Global Conference in Beverley Hills, California. Along with Dr. William Li, the co-founder of the Angiogenesis Foundation and author of "Eat to Beat Disease", both men talked about healing people with cancer using the Angiogenesis diet of starving the disease's blood supply by eating certain plant-based foods.

Over a decade ago, The Edge's daughter was a Leukemia cancer survivor, and since 2007 he has been on the Angiogenesis Foundation's board of directors.

The Edge was also interviewed by CNBC's Brian Sullivan about the importance of how a balance of food can help in fighting disease (as well as the future of streaming music). Watch the video below:

The Edge - Lead U2 Guitarist on the role food can play in fighting disease as well as his take on the state of the music industry from CNBC.

Bono and the Edge busk on Grafton Street on Christmas Eve 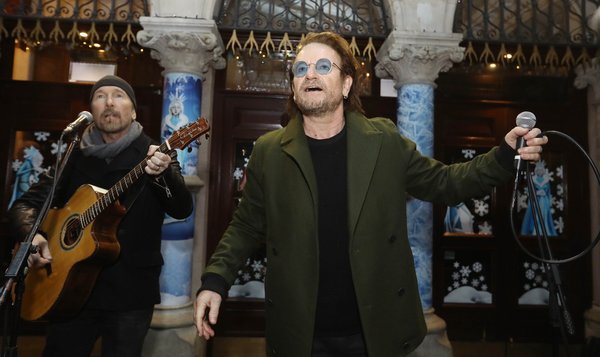 In support of Dublin's homeless population and The Simon Community, Bono returned to his annual Christmas tradition of busking on the streets of Dublin for the first time since 2015.

Bono invited the Edge for the very first time and together they performed "Love Is Bigger Than Anything in Its Way" as well as the traditional Christmas Carols "O Holy Night" and "O Night Divine".

Since 2009, Bono has collaborated with Glen Hansard and other singers, however, Bono missed the last two Christmas busking events in 2016 and 2017.

A makeshift stage was set up and crowds started gathering around it after 4 PM on Grafton Street.

The Dublin charity, Inner City Helping Homeless, reported that over 100 homeless people were discovered sleeping on the streets of Dublin this past Sunday night. There are over 10,000 homeless people (including 4,000 homeless children) living throughout Ireland. Donations can be sent to The Simon Community.

Watch the videos of the performances below:

U2 Frontman Bono Speaks To The Economic Club Of Chicago About AIDS, Poverty in Africa And More 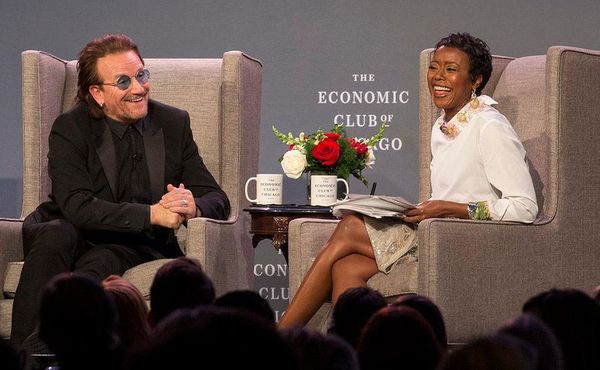 "I used to torture him. I really did," recalled U2 frontman Bono of his treatment of George H.W. Bush, only six days removed from the former President's death at the age of 94 on November 30.

He was referring of course to his antics during U2's early 90s Zoo TV tour, when he'd call the White House switchboard from the stage during each concert and ask to speak to the President, ultimately leaving him a message each night of the tour.

Bono went on to tell the story of a personal encounter he had with Bush in 2007, when the 41st President presented him with the Liberty Medal in Philadelphia, an opportunity he took to further harass the former Director of Central Intelligence. "I probably went a little far for the occasion," said Bono.

But Bush took the moment in stride.

"Grace and humor could get us out of a lot of trouble these days," said the singer in hindsight, looking back at the interaction.

It came at the end of an hour long conversation with Ariel Investments president and Economic Club of Chicago Chair, Mellody Hobson last Thursday at the Hilton Chicago. In conversation at the ECC dinner, Bono was asked what he's learned from a number of people and things including his fans, children, America and the former President.

Continue reading U2 Frontman Bono Speaks To The Economic Club Of Chicago About AIDS, Poverty in Africa And More.

Check out this video of Bono and the Edge performing "Summer of Love" at a beach house in Cape Cod on Saturday, June 30! The song was performed for the very first time live in front of about 200 radio contest winners and special guests hosted by Mix 104.1 as part of their ongoing "Beach House" series.

An artist's rendering of the claw at Loveland Living Planet Aquarium in Salt Lake City, Utah.
Photo courtesy of LLPA

In June of 2009, Brent Andersen - the founder and CEO of the Loveland Living Planet Aquarium in Salt Lake City - headed over to Barcelona, Spain to see U2 kick off their 360° world tour. Long before he even got to his seat at Camp Nou stadium, he caught glimpse of the Claw, the single largest stage ever constructed. "I didn't even want to walk into the stadium," says Andersen. "I was kind of holding up the line because I just wanted to look at it and take it in. I didn't really view it as just simply a functional piece of architecture. For me, it was a dynamic sculpture. It was a work of art."

When the aquarium acquired nine new acres of nearby land for an expansion, Andersen's mind went back to the Claw and an article he read about how the group was selling it. Boston real estate firm Panther Management even launched a website to showcase how it could be used as a permanent concert stage, an exhibition hall, a theme park, a civic plaza or even a biodome. Andersen reached out and struck a deal to acquire the one used on the North American tour. (Another claw was used for the European dates and a third one appears to have been disassembled.) If all goes according to plan, it will be fully in place by June of 2019.

Bono and The Edge surprised commuters in Berlin, Germany performing a 15 minute set that included "Get Out of Your Own Way", "Sunday Bloody Sunday" and "One" in the "Deutsche Oper (Berlin U-Bahn)" subway station on Wednesday. We found the best video clip online for you to watch and enjoy. 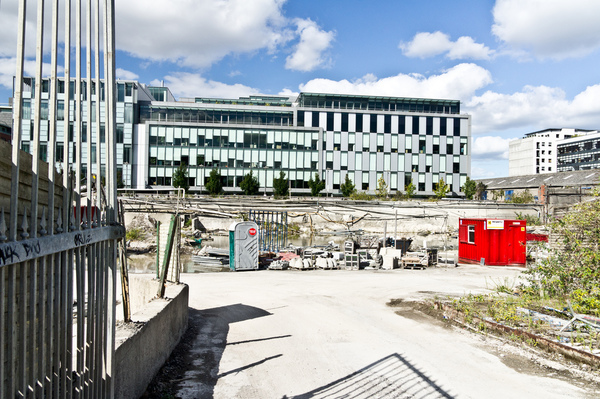 Plans for a U2 museum on the site of the band's recording studio in Dublin's docklands are at an advanced stage, with a planning application set to be lodged in the coming days.

Despite the fact that - along with Guinness, St Patrick, Oscar Wilde and, possibly, Michael Flatley's feet - U2 are Ireland's most famous export, there are no public spaces celebrating the band's achievements on the world stage.

Even the walls of graffiti which once surrounded their old studio at Windmill Lane have been levelled to make way for towers of glass and steel.

It is intended the four-storey museum will be dedicated to the band's archive and will include artefacts covering its 40-year story.

This page is an archive of recent entries in the Miscellaneous News category.

Political News is the previous category.

Essays is the next category.