U2 Are Getting Their Own SiriusXM Channel

"Generally when I open my mouth, people prefer if I'm singing," Bono said. "But on U2X RADIO, maybe they'll forgive me the odd interruption"

U2 are getting a channel devoted exclusively to their music on SiriusXM sometime next year. "[U2X Radio] will feature music from U2's acclaimed decades-long career," the company said in a statement. "Never before heard interviews and live concert recordings; favorites and surprises from the archive; band curated playlists sharing personal influences both new and old; plus content celebrating their Dublin roots and much, much more."

The band will join the Grateful Dead, Tom Petty, Bruce Springsteen, Pearl Jam, Frank Sinatra and a handful of other artists that have their own channels on the satellite radio network. "Generally when I open my mouth, people prefer if I'm singing," Bono said in a statement, "but on U2X RADIO, maybe they'll forgive me the odd interruption."

In statements, the other members appeared ambivalent about the news. "I'm not entirely sure what this, is but what it isn't is an opportunity to hear some bass solos," Adam Clayton said. "U2 24/7. Welcome to the last 43 years of my life."

Continue reading U2 Are Getting Their Own SiriusXM Channel.

Bono is really into drones now (but it's good)

The U2 frontman has just joined the board of Zipline, a medical delivery drone company that's already saving lives in Ghana and Rwanda.

On a Tuesday morning, U2 frontman and global philanthropist Bono stood in a remote field near Half Moon Bay, California, and launched a drone in the air, watching as it made a test delivery. Zipline, the eight-year-old Bay Area startup that makes the drones, uses the equipment to make emergency deliveries of life-saving drugs and blood to health clinics and hospitals in Rwanda and Ghana.

For the musician, who just joined the company's board--his first, and only, company board membership--it's the next step in two decades of work outside of his music career. "My story with Zipline actually started 20 years ago," he says, turning to Zipline's CEO, Keller Rinaudo. "How old were you 20 years ago, Keller?"

Continue reading Bono is really into drones now (but it's good).

U2 takes pride of place at Windmill Quarter installation

The musical history of the original Dublin docklands location of Windmill Lane Recording Studios has been recognised with the unveiling yesterday, by Moya Brennan of Clannad, of an installation featuring the sleeves of 21 of the most famous albums for which recording work was done at the studio. The sleeves have been embedded into the pavement of Hibernia Reit's redeveloped Windmill Lane, in Dublin's South Docks, to create a 'Vinyl Walkway'.

As well as being where U2's first three albums - Boy, October, and War - were recorded in full, the band also did much of the work on The Unforgettable Fire, The Joshua Tree and Achtung Baby in the original studio on Windmill Lane. It also served as the recording location for albums by international best-selling artists, including Clannad, Van Morrison, The Waterboys and Kate Bush.

Two special installations were made public: one dedicated to the six U2 albums; the other to 15 albums that were picked to reflect the breadth of material created there, over the studio's 14 years at the location. The selection of album covers are embedded beneath perspex glass, set into the pavement, and will be lit so they can be viewed at night.

During the construction of the Windmill Quarter, Hibernia Reit took steps to preserve large portions of the graffiti wall on Windmill Lane. Part of the wall is now installed in the museum at the Teeling Distillery in Dublin 8, whilst men's health charity Movember has raised funds through selling pieces of the wall, some of which can be seen as part of the EPIC exhibition in CHQ.

Stuck in a moment: U2 museum plans sent back to the drawing board

U2's plans for a visitor centre and museum in Dublin's docklands have been sent back to the drawing board by Dublin City Council amid "serious concerns" about the proposed scheme.

The rock band last June announced plans to demolish their two-storey recording studio at Hanover Quay on the south docks and replace it with a visitor and exhibition centre, the equivalent of four storeys in height.

The new building, which would be almost three times the size of the old studio, would house an exhibition centre dedicated to the band's history and a reconstruction of the band's original studio, along with a cafe and shop.

Continue reading Stuck in a moment: U2 museum plans sent back to the drawing board. 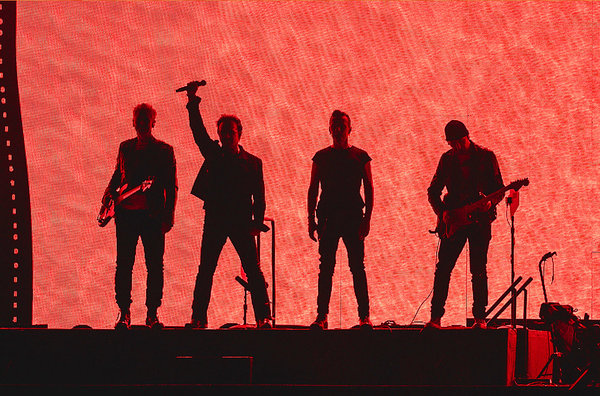 U2's world tour commemorating the 30th anniversary of The Joshua Tree, the band's Billboard 200 No. 1 album released in March 1987, grossed $62 million from 10 shows during its first four weeks on the road. That multimillion-dollar sales total easily earns the Irish rockers the No. 1 slot on Billboard's weekly ranking of Hot Tours (see list below). With box office results reported by tour promoter Live Nation, the sold ticket count from the first eight stadiums on the schedule reached 519,648. All 10 performances during the opening stretch of The Joshua Tree Tour 2017 were sold out.

The tour kicked off in Vancouver on May 12 with a crowd of 45,436 at BC Place Stadium. Single performances followed at stadiums in Seattle, San Francisco, Houston, Dallas and Pittsburgh markets as well as two-night stints at the Rose Bowl in Pasadena, California, and Chicago's Soldier Field.

Sometimes the answers you're after come from the most unlikely sources. Former U2 manager Paul McGuinness spoke with former Dire Straits manager Ed Bicknell at the International Live Music Conference in London earlier this month. Here were two former high-profile managers chewing the fat over their years in the music business with choice anecdotes for everyone in the audience.

Both McGuinness and Bicknell are astute, experienced players who operated for many years at the very top of the business. They also know that their comments will be circulated beyond the attendance of live music agents and promoters.

Certainly, many ears would have pricked up when the conversation moved to the issue of ticket sales and touting, as McGuinness' former charges U2 have seen sizeable quantities of tickets for their upcoming Joshua Tree tour end up on sites used by touts.

Report: Bono and Larry Mullen Have to Pay $1.5 Million Dollars to a Brazilian Promoter They Insulted 16 Years Ago

In one of the more protracted, bizarre rock star lawsuits in recent memory, U2's Bono and Larry Mullen have been ordered to fork over $1.5 million to a Brazilian promoter they defamed in an interview sixteen years ago, as fan site @U2 reported last night.

In 1998, U2 toured Brazil for their state-of-the-art, morbidly expensive PopMart tour. They later publicly claimed that promoter Franco Bruni had not paid them for the gigs they did in the country. This was not true, and just a couple of days after the interview, U2's former managing director went on record as saying the lapsed payment was for copyright fees for live performance, not for the actual performing costs.

Continue reading Report: Bono and Larry Mullen Have to Pay $1.5 Million Dollars to a Brazilian Promoter They Insulted 16 Years Ago.

U2 find what they are looking for as profits soar

A FIRM owned by the members of U2 last year recorded profits of over â‚¬3.7m as it reaped the dividends of the band's blockbusting world tour and new music.

New accounts filed by U2 Ltd show that the firm recorded the profits after sustaining a loss of â‚¬1m in 2014 - a positive swing of â‚¬4.7m.

The buoyancy of the firm's business is underlined, with its cash pile more than doubling during the year - going from â‚¬2.86m to â‚¬6.89m.

The average gross from each U2 gig was $6.92m - easily the most lucrative average gross out of any of the performers touring last year. The band played 76 dates in 22 cities.

Continue reading U2 find what they are looking for as profits soar.
« Fan Stories | Main Index | Archives | Film News »

This page is an archive of recent entries in the Business News category.

Fan Stories is the previous category.

Film News is the next category.