CANNES, France (Reuters) - Irish band U2 rocked the Cannes Film Festival early on Sunday with a short live set on the famous red carpet on their way into the main cinema for the premiere of a new film "U2 3D".

One of the world's biggest rock acts, U2's gig attracted hundreds of fans who crammed around the VIP entrance to the Grand Theatre Lumiere to hear Bono belt out "Vertigo" and "Where the Streets Have No Name".

Several actors from another film showing in Cannes, among them Spain's Javier Bardem, waited patiently with the crowds to dance to the music.

The performance helped set this year's festival alight after a subdued start, and underlined the importance music has played in Cannes this year.

Minutes before, just along the palm-lined Croisette waterfront, Finland's monster rock act Lordi performed "Who's Your Daddy?" and "They Only Come Out at Night" at a special party.

The makers of "U2 3D" say it is a pioneering recreation of a live concert.

Shot in South America during the band's "Vertigo" tour, it seeks to recreate the atmosphere of a gig and take fans on a thrilling visual ride. 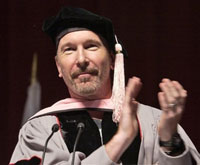 Boston has long been U2's American home but it may be a while before the band's next Hub homecoming, The Edge told the Herald yesterday before accepting an honorary doctorate from Berklee at Agganis Arena.

When asked if 2008 would be the year the Irish megastars play Fenway, the iconic U2 guitarist smiled impishly and said that, while that would be great, the band hasn't planned that far down the road.

"We're still working on material for the new album so it's impossible to say what will happen when," he said, dressed in his usual uniform of black beanie cap, jacket and T-shirt. "I think it will be another while still before we think about touring."

Since the band's American beginnings at the Paradise rock club to its recent sold-out Garden shows, the city has always been a major U2 stronghold, so receiving the honor from a local college made it doubly special, he said.

"I was just blown when I looked at the list of previous honorees," he said. "I saw friends like B.B. King and Quincy Jones and legends like Duke Ellington. It's an incredible list to be part of."

This page is an archive of entries from May 2007 listed from newest to oldest.

April 2007 is the previous archive.