In the name of love: Symphony orchestra to show off versatility with U2 covers 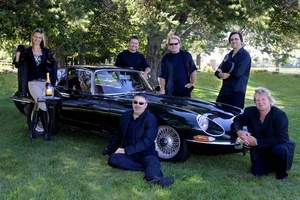 In a perfect world, The Edge would surprise everyone and sit in on Saturday's "An Evening of Irish Rock'' at the Weidner Center.

But since not even a whole lot of St. Patty's Day luck is likely to make that happen, Jeans 'n Classics is betting on something they have that Bono doesn't to pull off a retrospective of U2's biggest hits: the Green Bay Symphony Orchestra.

The symphonic rock outfit out of Canada will bring a five-piece band and two singers to the stage to join the local orchestra in celebrating the legacy of Irish music -- from Thin Lizzy to Van Morrison to an entire set of U2's music arranged by Jeans 'n Classic founder and guitarist Peter Brennan.

Continue reading In the name of love: Symphony orchestra to show off versatility with U2 covers. 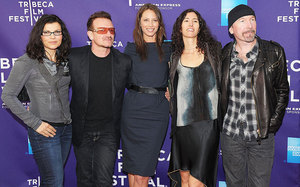 As one of the most ambitious, extravagant and dynamic shows ever to hit Broadway, the $75 million Spider-Man: Turn Off the Dark musical might have been expected to spin nothing but good fortune for songwriter Bono.

By Jacqui Goddard in Miami, The Telegraph

But the latest chapter in a legal dispute over the production's troubled genesis has heaped fresh embarrassment on the U2 rocker, one year after he and the show's producers fired Tony Award-winning director Julie Taymor in a disagreement over her creative vision.

Court documents filed by Ms Taymor, 59, in US District Court in New York have unleashed a new wave of venom in the unseemly row over her sacking, alleging that Bono and fellow U2 band member The Edge - who jointly wrote the musical's score - "severely hampered" the show's progress at a time when its future was on the line.

Drawing in part on private emails written by the show's principals, Ms Taymor's court filing alleges that the pair were largely absent from the show's crucial developmental stages, delivered unsuitable music and lyrics, conspired with the producers to oust her and were "frequently distracted" from their duties - on one occasion in Bono's case, by alcohol and supermodels including Christy Turlington.

By Tim Molloy, The Wrap News

Rock gods have the same awkward interactions with panhandlers that you do.

U2 guitarist The Edge, producer of Friday night's MTV special on youth homelessness, "The Break," says he, too, sometimes finds himself at a loss about how to help people on the street.

"There's that awful thing where you realize there's nothing you can do, right at that moment, so you kind of pretend they're not there," he told TheWrap. "And I think for somebody who's homeless, particularly someone who's panhandling, that's the most emotionally difficult thing, is to become like a non-person. Like you literally do not exist to someone walking by.

'Spider-Man' director chides U2 in lawsuit

NEW YORK, March 3 (UPI) -- The former director of Broadway's "Spider-Man: Turn Off the Dark" says Bono and The Edge left the production hanging while they toured with U2.

Julie Taymor said in court documents the delays in getting the complex musical ready for its premier were due in large part to the rockers' failure to make needed changes to the score in a timely manner.

The pair, Taymor alleged, failed to attend rehearsals and ignored her e-mail seeking their input on musical numbers, which resulted in the whole production being thrown off schedule. The producers have filed a countersuit against Taymor blaming her for their losses, The Hollywood Reporter said.

This page is an archive of entries from March 2012 listed from newest to oldest.

February 2012 is the previous archive.