Stuck in a moment: U2 museum plans sent back to the drawing board

U2's plans for a visitor centre and museum in Dublin's docklands have been sent back to the drawing board by Dublin City Council amid "serious concerns" about the proposed scheme.

The rock band last June announced plans to demolish their two-storey recording studio at Hanover Quay on the south docks and replace it with a visitor and exhibition centre, the equivalent of four storeys in height.

The new building, which would be almost three times the size of the old studio, would house an exhibition centre dedicated to the band's history and a reconstruction of the band's original studio, along with a cafe and shop. 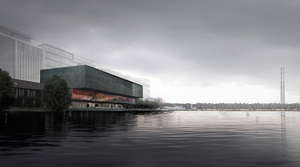 The council said the design of the new building "could be described has a brutalist and contemporary interpretation of the existing structure and the influence of U2 at this prominent Dockland site".

However it said it had "serious concerns about the height of the proposed building". While the application was for a three-storey building, over a basement, the building would be the equivalent of four storeys over ground because of a double-height second floor level.

This could have a negative impact on a nearby residential building which was currently under construction, the council said, and could in future block natural light from these homes and "will appear quite foreboding and visually uncompromising" to future residents.

The height "would also have a detrimental visual impact and create an imbalance in terms of urban form and massing along the campshires" next to the riverside.

The council also had "reservations" about the "lack of synergy" between the building and a neighbouring protected structure which developer Harry Crosbie wants to turn into a hotel.

Mr Crosbie has sought permission to turn his current home at 9 Hanover Quay into a "boutique hotel". Mr Crosbie, who previously owned the U2 building, has written to the council in support of the band's redevelopment plans.

However, several other locals have submitted objections to the scheme. The Grand Canal Dock Residents Association said the "four-storey concrete slab structure" was out of scale for the location and there was potential for "increased antisocial behaviour" from U2 fans visiting the centre.

Carysfort Capital, which owns a neighbouring apartment block, said the centre "brazenly juts out over Grand Canal Dock" and would have a "devastating impact on the character of the area".

U2 have six months to resubmit their plans to the council. Once the council makes its final decision, it cannot be appealed to An Bord Pleanála.

The Dublin Docklands Development Authority (DDDA) bought the studio from the band, using compulsory purchase powers, in 2002, with plans to demolish it. As part of the deal U2 was to be accommodated in a 32-storey development nearby, known as the U2 Tower. Planning permission was granted for the tower but the economic crash intervened and the development never went ahead.

Bono and the Edge perform "Summer of Love" at a beach house in Cape Cod was the previous entry in this blog.

Bono loses his voice 5 songs into the show in Berlin is the next entry in this blog.