U2 returns to Las Vegas with unsettling 'Experience'

Star-spangled bullhorn pressed to his lips, his voice boomed as torches blazed.

"This is not America," Bono declared as footage of white supremacists marching in Charlottesville, Virginia, last August aired on the football-field-long video screen, displayed with a crispness that captured their anger down to their pores.

"This is America," the U2 frontman said, then pivoted as the scene shifted to an equal rights gathering, the faces changed, the passions similarly palpable.

A couple of numbers later, a three-story America flag was unfurled from the rafters of T-Mobile Arena as Bono brandished his bullhorn once more, this time in the service of "American Soul," a propulsive rallying cry with a bullying bass line and flecks of wah-wah guitar.

During the song's verses, Bono sought to articulate what America means to him. 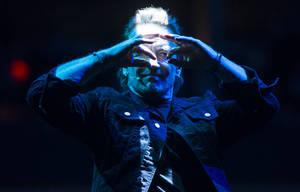 Defining America as an intangible -- a sound, a thought -- means that it signifies something more than a nation with clear, established borders, something capable of resonating with an Irishman as much as a native.

His point: America is an ideal as much as a broad swath of land, and sometimes that ideal needs defending.

This sentiment has particular resonance locally.

"In times of crisis, you became even more American," Bono said, referencing Oct. 1 and Las Vegans' willingness to donate blood to aid others.

Expounding upon this notion of fellowship to the point of proselytizing was one of the main thematic engines powering U2's "Experience + Innocence Tour," which brought the band back to Vegas for the first time in nine years on Friday night (the group returned for a second show on Saturday).

The outing takes its name from U2's two most recent albums, 2014's "Songs of Innocence" and last year's "Songs of Experience."

As their titles suggest, the albums are companion pieces, the former the more personal of the two, with lyrics that frequently and directly address events of Bono's youth.

The latter album is a bit more universal and topical, with generalized themes of returning home upon gaining life "Experience" and alluding to current political headwinds to a greater extent.

"Experience" being the more recent album, it was mined much more heavily during U2's 26-song set, opening with a spare, pensive, tone-setting "Love Is All We Have Left." Bono delivered the song alone on an elevated catwalk that connected two smaller stages book-ending the arena and was suspended beneath the massive, aforementioned rectangular video screen.

Then came a snarling "The Blackout."

"Statues fall, democracy is flat on its back, Jack," a black-clad Bono sang. "We had it all, and what we had is not coming back, Zach."

This is how the evening went: Here was U2 at their most hopeful and their most dire, often from one song to the next.

In this context, even old songs took on fresh meaning, like "Achtung Baby" deep cut "Acrobat," which the band is performing on this tour for the first time ever.

U2 is skilled at making the outsize feel intimate, whether it's jamming hard on staples like "Elevation" and "Vertigo" in tight quarters on the circular "E" stage or through the subject matter of the songs themselves.

During a suite of "Innocence" tunes, Bono revisited his childhood, pining for his mother on "Iris" ("I have very few childhood memories. Even fewer of my mother. So I write to remember her," he said by way of introducing the song named after her.) "Cedarwood Road," titled after the street Bono grew up in Northern Dublin, recalled life inside "a war zone in my teens," while "Raised By Wolves" recounted a car bombing in his hometown that took 33 lives, the song prefaced by news footage of the incident.

All of this added an air of tumult, equivocation and emotional turbulence to a band whose catalog is, more often than not, meant to uplift.

That spirit was present on this night as well: The difference this time around was that it was tempered by uncertainty. There were moments of doubt here, and the clear sense that if there is any hope to be had, it's something that has to be fought for.

It's not a given.

"I know the world is done," Bono sang on show-closing ballad "13 (There is a Light)," underscoring this sentiment. "But you don't have to be."

"There is a light. Don't let it go out," he implored as the song reached its conclusion, plucking a light bulb out of a model of his childhood home on stage.

Then, in a flash, he was gone.

And on came the lights.

Review: U2 Is Still Fighting for the American Dream was the previous entry in this blog.

Review: U2: Beauty and bombast at United Center is the next entry in this blog.