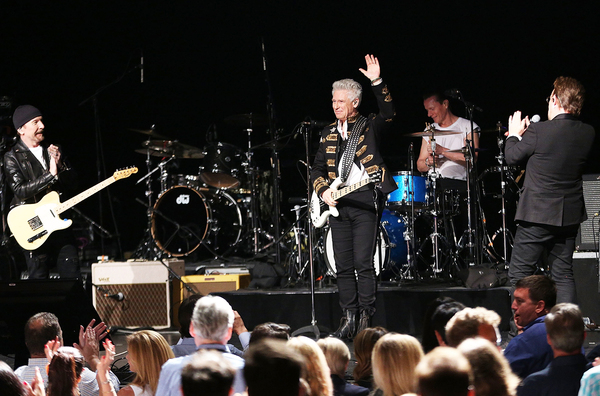 In a frank and heartfelt speech, U2 bassist Adam Clayton thanked his bandmates of four decades for their support during his treatment and recovery for alcohol abuse years ago, and then joined them for a rollicking rendition of a few hits.

"We have a pact with each other," said Clayton, 57, who was receiving an award from MusiCares, the charity arm of the National Academy of Recording Arts and Sciences. "In our band, no one will be a casualty. We all come home, or none of us come home. No one will be left behind. Thank you for honoring that promise, and letting me be in your band."

.@U2's Adam Clayton accepts the Stevie Ray Vaughan Award in recognition of his dedication and support of the #MusiCares MAP Fund. pic.twitter.com/pD6x1tkukF

He ended by quoting lyrics that Bono, U2's frontman, had written when the band was starting out: "If you walk away, walk away, I will follow." At that, his bandmates came out to join him, performing "Stuck in a Moment You Can't Get Out Of," ''Vertigo" and, fittingly, "I Will Follow."

The evening at the PlayStation Theater in Times Square also featured performances by rapper Michael Franti, Jack Garratt, reggae singer Chronixx, Macy Gray, and The Lumineers, who are currently appearing with U2 on their Joshua Tree tour.

Clayton was introduced by British record producer Chris Blackwell as someone who "lived through addiction and came out the other side, and has been courageous enough to admit it."

Taking the stage, the bassist quipped: "I'm not used to achieving anything on my own."

Turning serious, he said: "I'm an alcoholic, addict, but in some ways that devastating disease is what drove me towards this wonderful life I now have. It's just that I couldn't take my friend alcohol. At some point I had to leave it behind and claim my full potential."

He said part of the reason he had a hard time quitting drinking was that, "I didn't think you could be in a band and not drink. It is so much a part of our culture."

It was Eric Clapton, he said, who finally told him he needed help.

"He didn't sugarcoat it. He told me that I needed to change my life and that I wouldn't regret it," Clayton said. He credited another friend, The Who's Pete Townshend, for visiting him in rehab, where he "put steel on my back."

GRAMMY winners @U2 take the stage in honor of Adam Clayton with a special performance at the #MusiCares MAP Fund benefit concert. pic.twitter.com/BE6LzWgP7D

As for his bandmates, Clayton said, "I was lucky because I had three friends who could see what was going on and who loved me enough to take up the slack of my failing. Bono, The Edge, and Larry (Mullen) truly supported me before and after I entered recovery, and I am unreservedly grateful for their friendship, understanding and support."

Clayton received the Stevie Ray Vaughan Award for his support of the MusiCares MAP Fund, which offers musicians access to addiction recovery treatment.

Arriving at the theater earlier, he told reporters the fund was especially important given the current epidemic of opioid addiction. "MusiCares ... really provides funding for a lot of people to look into those things and find help," he said.

He added that his bandmates had been supporting him for 40 years.

"You know, I guess they loved me before I knew how to love myself," he said. "So it's really important that they share this with me.

U2 goes MAGA at FedEx Field was the previous entry in this blog.

Watch U2's The Edge recall his first experience with magic mushrooms is the next entry in this blog.