Top U2 News Headline: U2 will join George Clooney and Gladys Knight as 2022 Kennedy Center Honorees

Bono has 'a lot to learn from Andrew Lloyd Webber' 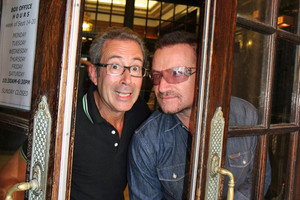 Bono certainly was a busy boy on U2's recent trip to Toronto. He popped by a local radio station , played a couple of concerts at the Rogers Centre , and, we have learned today, dropped by the Royal Alexandra Theatre to sit in on a rehearsal of the new(ish) Andrew Lloyd Webber and Ben Elton musical, The Boys in the Photograph.

"[W]e have a lot to learn from Andrew Lloyd Webber," Bono said, in a quote Mirvish Productions have supplied to the press along with the above snazzy photo of him and writer/director Ben Elton.

That quote might be a bit shocking to some U2 fans - but only those who didn't know that Bono and The Edge are in the process of writing the music and lyrics for Spider-Man: Turn Off the Dark , a musical set to open on Broadway next year. (Yes, still, despite rumoured financial troubles .) Thematically, too, Boys in the Photograph is up Bono's alley, given that it deals with the Irish Troubles in the late sixties and early seventies. Heck, http://en.wikipedia.org/wiki/Sunday_Bloody_Sunday_ per cent28song per cent29 could very well be one of the songs.

But how did Bono's interdisciplinary visit come about? I called Ben Elton, who is directing the Mirvish/Manitoba Theatre Centre co-production, at his Toronto hotel to find out.

"It was just one of those wonderful strokes of good fortune," says Elton.

It started when Elton was invited to the U2 afterparty last Thursday. (He has had "kind of a vague connection with Bono over the years" and the lighting designer who worked on We Will Rock You is also working on U2's tour.) When Elton started chatting with the band's singer and mentioned what he was working on in Toronto, well, one thing led to another: "Bono immediately said, 'I'll come and have a look.'"

"It's no secret [Bono and The Edge] are working on the Spider-Man project," Elton says. "They're very interested in theatre... [Bono] said he felt it was important to build bridges between different art forms."

Bono dropped by for about an hour, watched some scenes and even gave notes to the all-Canadian cast. "He spoke to the cast with passion and humour about what he had seen and even shared some tips on Irish phrasing with our lead couple," Elton says. "He told us how his mother was Protestant and his father Catholic which gave him a unique view on the divisions illustrated in our show."

And did Elton - whose Queen musical We Will Rock You has been running in the West End since 2002, ran two years in Toronto and will [http://www.brianmay.com/brian/briannews/briannews.html]soon be turned into a film - return the favour by passing on any tips to Bono on how to make jos Spider-Man musical a success?

"No, we talked about my musical," says Elton, who, as a director, knows very well not to shift focus away from what you want to highlight. "It was a very special day."

For you Bono-holics, here's Paul David Hewson's full quote from the press release: "As song writers new to the theatre, we have a lot to learn from Andrew Lloyd Webber. And Ben Elton is so sharp - I'm interested in anything he does. This is a Canadian company telling an Irish tale by British writers on a theme that unites the whole world. Stories like this need to be told and told in the popular theatre."

Tom Cruise supports U2 at Boston gig was the previous entry in this blog.

U2 manager delighted to bring stage show full circle is the next entry in this blog.